We conducted an experiment by creating a special Uchu art, thinking that adding energy to Euglena might shorten the growing time and make them more active. However, no particular difference was observed in two experiments regarding the growing speed, and when we were about to end the experiment with the conclusion that energy does not affect the culture speed, we found an unexpected effect.

When qigong energy was sent to sick people, symptoms sometimes disappeared or were alleviated. This can be interpreted as the energy influencing the life phenomena. Therefore, we thought that we might be able to extend life phenomena by giving energy to life, especially to plants, in the hope that we might be able to make them grow faster, grow bigger, or bear more fruit, rather than just dealing with the disease. We started the project at the end of April by planting vegetables in the field and transferring energy to them.

We gave up on the vegetables early on because the number of plants to be used as samples was too small and because we could not match the same conditions other than energy because of the considerable difference in sunlight depending on where the plants were planted, so we could not obtain significant results.

Next, we took up Euglena. Euglena is microorganisms that exist somewhere between animals and plants, but they photosynthesize, so their effects on plants are similar to those of plants, and since live Euglena is commercially available and several methods for raising them have been introduced on YouTube, etc., and since they are microorganisms, there are large numbers of specimens available, and we can expect to obtain significant results even with a small amount of cultivation.

We found that we could culture them simply by filling a PET bottle with tap water to remove the chlorine, adding a little liquid fertilizer for plants, and adding a stock solution of Euglena (a light green liquid with live Euglena inside), so we used this method.

We started with a very small amount of fertilizer, transferred the energy to one bottle by making a dedicated Uchu art and did not modify the other bottle at all, and placed it on a sunny second floor balcony for observation. We started on May 23 and continued until June 12.

The results showed that it took about a week for a lighter green color to appear, and the green color seemed to darken more quickly for those who added energy, but early in June, those who did not add energy caught up to the same intensity, and then the green color deepened somewhat, but no difference could be detected between those with and without energy.

The next experiment was conducted in pairs with different environments: the first pair was set up on a sunny balcony as in the first experiment; the second pair was hung on a clothesline behind the house. The third pair was placed indoors and illuminated by LED lights 24 hours a day. Furthermore, different from the previous experiment, the plastic bottles were left in their respective locations without shaking or opening their lids once a day. The indoor LED illumination was in the form of a large diameter glass container with a clear plastic lid on top. We also added about five times the amount of liquid fertilizer in the first session.

The LED light changed color at about one-third the rate of the Sun light, but it also changed color at the same rate, with or without energy. By the 20th of June, the game was over, with the result that there was no difference in the speed of incubation as long as there was sufficient fertilizer. After that, when we left the experimental specimens as they were, the color of the Euglena in the plastic bottles faded at some point and reverted to the original clear liquid.

This is thought to be due to the lack of carbon dioxide for photosynthesis or, conversely, the lack of oxygen, as the bottles were left with their lids closed and no aeration took place, causing the Euglena to disappear. In particular, the Euglena on the sunny balcony disappeared quickly. 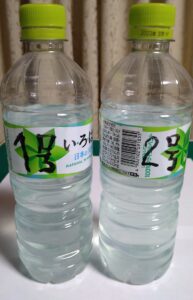 However, of the bottles left in the shade, we found that only the bottles with energy kept their green color. 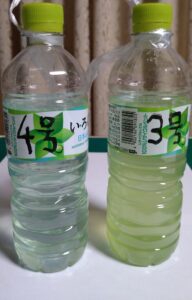 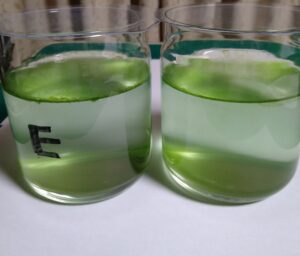 All the photos above are as of June 28, but there is a clear difference between the No. 3 and No. 4 bottles. The growth environment has probably deteriorated more slowly than in No. 1 and No. 2, which were left on the balcony, but No. 4 is almost at the same level as No. 1 and No. 2, but only No. 3 is still holding up somehow.

Incidentally, we opened the lids of all the PET bottles today and found that they were all closed with the same firmness, so there was no indication that only No. 3 was loose.

We have found that differences in environmental conditions have a significant impact on the rate of growth and the rate of deterioration of the growing environment. The most important conclusion is that energy, if it has an effect, may affect the ability of the plants to hold up under deteriorating growth conditions.

We plan to conduct another experiment to see if we can replicate this, and if we do, we will conclude that energy is likely to have had an effect.

However, we concluded that there was no difference in the rate of growth in a spontaneous growth environment.