ホーム > Techniques > How to train a qigong master

This article describes how to improve your qigong skills.

I am writing this article for those who have done the rudiments of qigong but are interested in how to improve beyond that.

Because qigong consists solely of manipulating consciousness, there is little sense of touch.

As a result, I think it is difficult to be convinced that what you are doing is correct.

I myself have little or no sense of energy in all senses, including touch, seeing, hearing, and so on. Therefore, I think it may be helpful for some people to write about how such people have improved their skills.

When you have the knowledge that someone has mastered a skill in this way, you can think that you may also be able to improve by doing the same.

The key to learning and improving your skills is to

When learning qigong, you may suddenly be confronted with something that you find difficult to understand in the ordinary sense, such as “clean and sweep the inside of the boundary with the chi sphere” or “define the chi sphere as client A”.

When you look back at it after you are able to do it, you will be convinced that it is right, but at first, you will probably be confused. 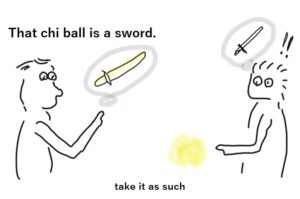 The point here is that once you accept that it must be so, you stop judging it by your own sense that it cannot be so.

So you would be tempted to judge that you cannot believe such a thing.

In such a case, you have to take it as if that is what we are doing here. We’re going to assume that this chi sphere is the client. Then you can move on to the next step, which is that if you put your attention on that chi sphere, you can perform the treatment.

You feel uncomfortable, but you don’t deny it for that reason. The correct answer is to say, “That’s the way it’s set up,” and move on.

We are now ready to accept the uncomfortable. Then the next step is to explain how to increase the sense of acceptance of what is not palpable, a manipulation of consciousness.

This is to compensate for the tactile sensation by adding gestures to give a physicality to the experience.

Suppose you are performing an operation to channel chi to a client, where chi flows through your left arm and from the fingertips of your left hand toward the client, the chi sphere in front of you. 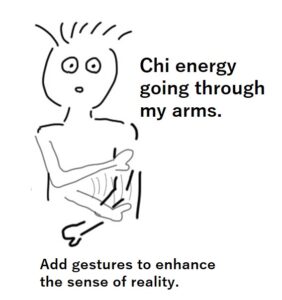 At this time, in addition to imagining the chi flowing through your arm with your consciousness, you would simultaneously choreograph the chi in your left arm as if you were using your right hand to scrape it out from your shoulder toward the fingertips of your hand.

As you scrape the chi out, imagine that your right hand is feeling the weight of the chi.

If you do it in an environment where no one can see you, there is no need to be shy.

The trick is to do it seriously, with a realistic performance. In this way, the manipulation of the consciousness of flowing chi and the action of scraping it out with the hands become one operation with a sense of touch, and it becomes easier to transform the image manipulation in the mind into an actual functioning manipulation.

It is not special to qigong, as it is said in all kinds of practices, “Keep going until the quantity turns into quality.

It is ambiguous what is required for quantity to change to quality. However, if you keep repeating an operation, you will be able to operate it unconsciously without thinking about how to operate it. Then, the initial feeling of discomfort will disappear of its own accord, and whether you can believe it or not will become irrelevant, and the operation will produce results. When concrete results are achieved, you will naturally be convinced that this is the way it is.

This is like being able to ride a bicycle without having to think every step of the way. You no longer think, “This is impossible,” or “I’m going to fall over,” and it becomes natural.

This is so that the treatment can be performed only with the manipulation of the consciousness.

As you become more familiar with the technique, you can simplify the imagery and narrow it down to just the image of energy entering the client.

You can name the image of the operation or give it a simple image, and then you will be able to activate the operation simply by picturing it in your mind.

As noted in “How to Procure Energy,” frequently used energies can be called up at any time, and the destination of the energy can be transferred if you can connect to it. 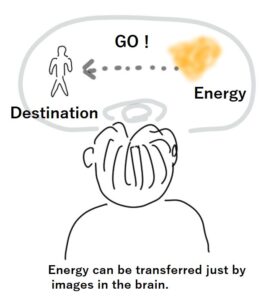