This section describes how to record the procured energy as a two-dimensional image.

We explained that usually, in energy work, we can devise a way to name the energies that we use frequently, for example, to name them so that they can be retrieved quickly.

However, to operate this method requires the skill of the practitioner, and the energy cannot be used directly by a non-practitioner.

This section describes a method of imaging the energy so that it can be retrieved at any time without relying on the skill of the practitioner.

The method is to make an image of the energy. And the images thus created are called Uchu art. 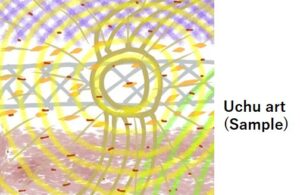 First, as described in “How to procure energy,” once you have decided that this is the kind of energy you want, you create the desired energy by imaging it yourself or by copying it from an external source.

Next, we create the image by channeling the energy, detecting how it should be drawn, and then drawing it accordingly.

Here, the term “channeling” is used in the sense of asking the energy questions and getting answers.

We ask the energy what color and how it should be painted to express the energy, and then we get the answer.

This process of getting an answer at the time is, in my case, using a pendulum to detect how the image should be painted by means of questions that can be answered with “yes” and “no”.

I learned this method from my mentor at the beginning of the year 2020, but she told me that asking questions and getting answers requires a talent, and few people have been able to teach it. 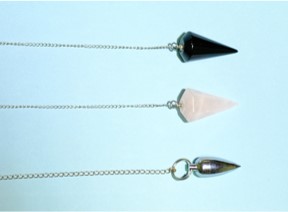 However, the process itself is a simple accumulation of asking questions in inner speech (saying them in your head without saying them out loud) and detecting the answers with pendulums, so if you have the talent, you may be able to do it.

Now, the resulting image (i.e., Uchu art) is an image that radiates the energy of what was initially set up. The Uchu art itself radiates energy, so for example, if you have an Uchu art that changes the taste of wine, you can wrap it around a bottle of wine, and the energy from the Uchu art will affect the wine in the bottle and change the taste of the wine. 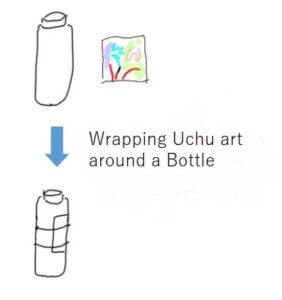 Anyone can wrap the Uchu art around a bottle so that the energy can be transferred without the need for a professional qigong practitioner to perform the procedure.

In addition, Uchu art is usually created as digital data using drawing software. Thus, any number of copies of Uchu art can be created by printing them out, eliminating the need to depend on the practitioner’s treatment.

Of course, the practitioner can also perform the treatment by transferring the energy emitted from the Uchu art as it is, thus eliminating the need to prepare the energy before the treatment.

One can look at Uchu art as energy goods that radiate energy in this way.

Some of the works of people who are considered artists radiate a variety of energies. Or, many of the best artists’ works radiate some kind of energy intensely.

There was a case in which a centuries-old Buddha statue that was said to be beneficial for curing eye diseases was found to emit the kind of energy that improves health when its energy was examined.

So I believe that there are many objects that have similar functions as a result of Uchu art.

Since Uchu art is designed from the beginning to radiate the kind of energy it is intended to radiate and created with the intention of achieving the exact function it is supposed to, it is a concept more akin to an industrial product than a work of art.

2.Uchu art is digital data, so it can be easily reproduced and handled by anyone.

3.The transfer of energy  by remote treatment is faster than directly transfer from the Uchu art to the object.