I am developing several kinds of Uchu art that changes the taste of wine.

I would like to talk about how I came to create this art.

I learned how to make Uchu art from my mentor after New Year’s holiday week in 2020. But she passed away suddenly almost two months later. I decided to replace her and started to promote Uchu art, and at first I was making Uchu art for healing.

I originally came up with the idea of making healing Uchu art because I have been healing with qigong and a tool that could radiate healing energy directly and transfer energy without having to perform the procedure seemed very useful.

It was just when COVID19 was rapidly becoming infested, and I was making Uchu art by creating energies to neutralize COVID19 and to get rid of hay fever. 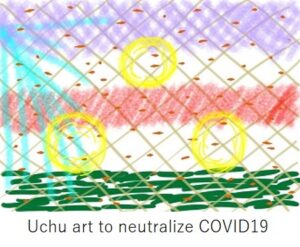 However, although the artwork was created, no one around me has been affected by COVID19 and I distributed it to my acquaintances and friends to use, but if healthy people maintain their condition, I do not know if their health is maintained thanks to the Uchu art.

Without verification, it would be difficult to persuasively introduce it to the public, so we came up with a means to widely publicize Uchu art.

One of the ways I came up with was to exhibit my work in an art exhibition. I found an exhibition that solicits and exhibits works by amateurs, and I thought of a work to submit to it. Uchu art is not a work of art, so it is unlikely to be highly rated by the exhibition’s judges. My aim was to find someone on the jury who would surely be sensitive to energy, so that he or she would ask, “What is this work? and I thought that this would be a good opportunity to appeal to them. 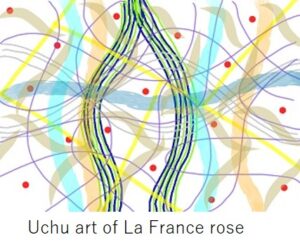 I thought it would be a little too exciting to submit a work of Uchu art that would neutralize COVID19, so I decided to create Uchu art for non-healing purposes. So I prepared to submit some Uchu art based on subjects such as the energy of roses and the energy of blessings. Then, due to COVID 19, the exhibition was cancelled for that year.

The rose flower Uchu art and other art were left, but it seemed difficult  to objectively verify how this could be the energy of a rose flower. I thought that the quickest way was to create Uchu art that would make people who are not familiar with energy could feel so. And I happend to come up with the idea of Uchu art that changes the flavor of wine.

It is said that liquids absorb energy easily, and if the influence of the energy is felt as a taste, it is easy to objectively convince people that it is the influence of Uchu art. There are various kinds of liquids, but it seemed unlikely that the taste of water would change dramatically. So we chose wine. Wine is a beverage whose taste changes with age, so there would be little resistance to a change in taste itself.

This is how we came up with the idea of creating Uchu art that recorded the energy of great vintage wines, and thought it would be interesting to put that energy into cheap wine on the market and see if the taste changed, so we created Uchu art as a play. There is a fourth class chateau in Bordeaux called Chateau Talbot, and its 1982 wine scored 96 points in Parker points, which is a well-known wine rating system. I chose this as the subject because I had drunk it twice before and could recall the taste. Chateau Talbot, by the way, is a mixed type of Cabernet Sauvignon and Merlot grape juice, and is a full-bodied, heavy red wine with a Bordeaux-like flavor.

Then a wine-loving friend of mine was amused and experimented with several pieces of Uchu art wrapped around various wines of different brands. When he opened the bottle, he found that there was a clear difference in taste between the wines with the Uchu art wrapped around them and the wines without. Moreover, the change occurred without exception, regardless of the brand of wine. 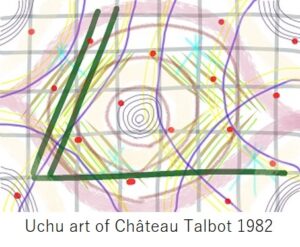 The wine of the one with the Uchu art wrapped around it was more astringent and changed in the direction of a heavier flavor. What was interesting was that the wine made from Pinot Noir grapes, which are characterized by a light mouthfeel, lost its lightness due to the Bordeaux-style astringency caused by the energy emitted from the Uchu art. In short, it was found that the wine tasted more like Chateau Talbot.