ホーム > Uchu art > How did Kannon Energy Water come into being?

Many of you may be thinking, “Why Kannon (Avalokitesvara, goddess of mercy) is named for this energy transfer service?

In this article, we would like to explain behind the scenes of how we came to create Kannon Energy Water.

First of all, there was originally a painting that radiated the energy of Kannon. It was drawn by a female calligrapher. If I were to delve into the story of why this painting was created, it would take up an entire article, so I will write about it in a separate article. 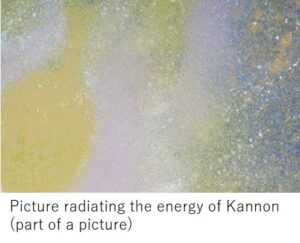 As I wrote in “What is Uchu Art?”, sometimes a work of art by an outstanding artist has the ability to radiate a specific energy, regardless of the artist’s intentions, and this painting is a perfect example. The artist herself was convinced when my mentor told her that it was emitting the energy of Kannon. Incidentally, this painting was done long before I encountered Uchu art.

Although Kannnon is a personification deity with many stories attached to it in terms of a religion, from the perspective of energy work, it is a type of energy that can be recorded as Uchu art or transferred to people or objects.

Now, back to Kannon Energy Water. We regularly hold wine parties, taking advantage of the fact that putting energy into wine changes its taste. At those wine parties, we open a bottle of wine with and without energy at the same time, with the aim of allowing people to feel through their sense of taste how the energy affects the wine.

We also try to familiarize people with the world of energy by allowing them to experience firsthand that invisible energy exists and acts on things and people.

Every time, the people involved get together in advance to plan the next wine party, and one day, one of the members mentioned that it would be helpful to have some Uchu art that would help when you get a hangover from drinking more than usual. So we created energy in the setting that would alleviate the hangover and drew it as an Uchu art. At this point, I came up with the idea of having the energy once absorbed into water, which would then be taken into the body by drinking it. 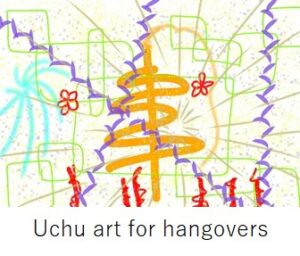 Liquids are said to absorb energy easily, and by having water absorb energy and then drinking the water, the energy should also be taken into the body. Since the final destination of the energy is the person who has the hangover, the energy can be put directly into the body, so-called remote treatment, but the treatment should be adjusted to the person’s condition. On the other hand, the energy to alleviate hangover is defined as a general effect, not for a specific person, so it is not possible to check every time whether it is effective for the person who uses it or not, or whether it fits his/her constitution. Therefore, we thought it would be better to let the user absorb the energy of the water once, so that the user can check whether it is suitable for him or her by taking it in small quantities.

This is how we created the Uchu art of energy water, and we were able to verify that this energy water works very well.

Therefore, we decided to introduce energy water as part of our energy transfer service menu, and the first product we created was Kannon Energy Water.

Since the scope of use was too narrow to target only hangovers, we decided to upgrade the energy to one that is good for the body more broadly, and since we originally used pictures that radiate Kannon energy for healing purposes, we decided to combine it with this energy to improve overall health, while also We have created an energy that can be applied to the specific symptom of a hangover.

The product was then made to be absorbed through water, allowing the user to check it and use it at his or her own pace.

In this article, we have written about how Kannon Energy Water was born.

Thank you for reading this far.